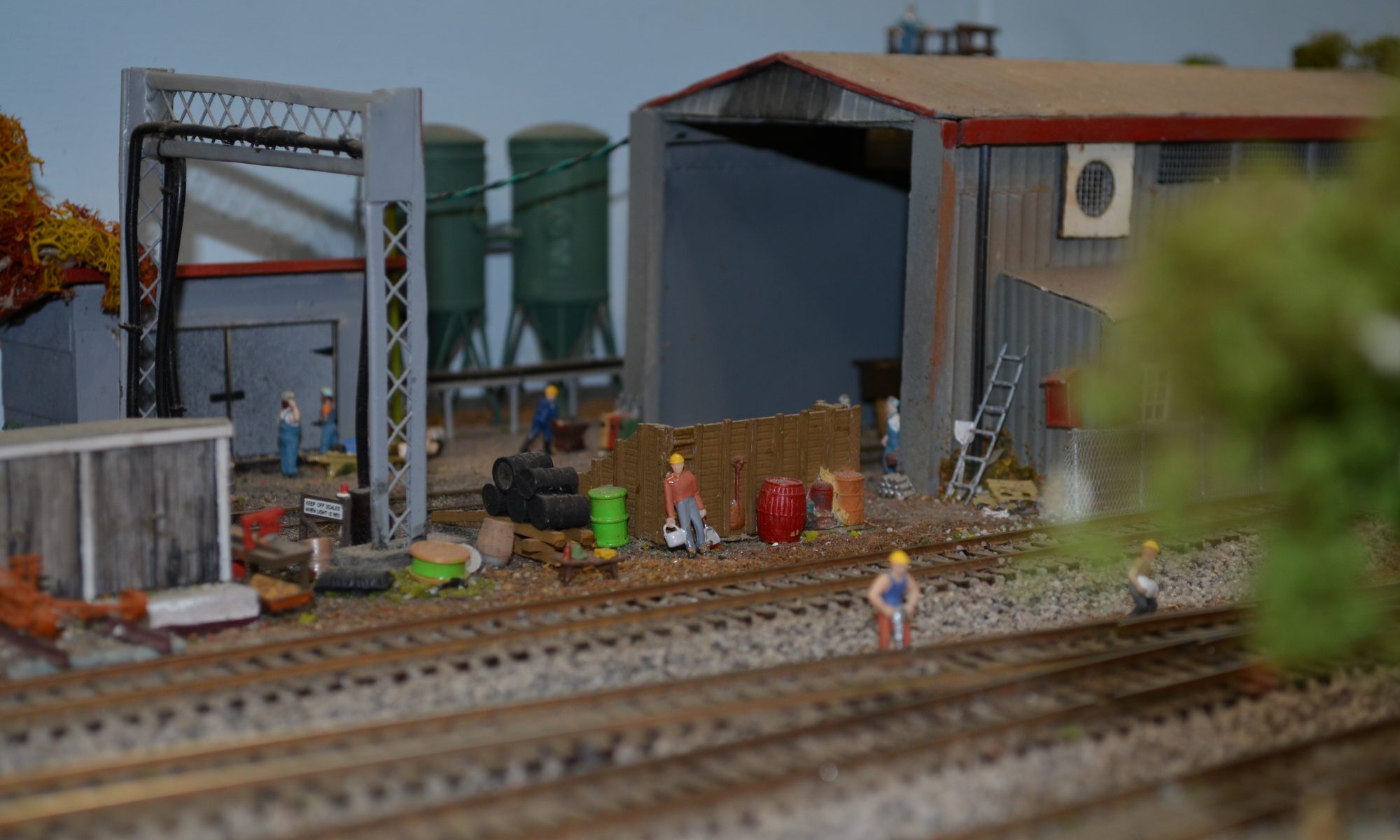 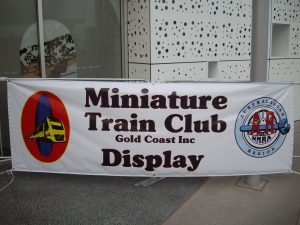 Following the establishment of bank accounts, drawing up of a Constitution and Bye Laws and election of a steering committee incorporation was effected on 10th July 2009.

Our inaugural year saw members resurrecting and constructing an exhibition display “ Intercontinental “ which was displayed at a number of Model Train Exhibitions including the Brisbane Miniature Train Show and Darling Downs Model Train and Hobby Show (Toowoomba).

August 2009 also saw us locating our operations at Broadwater Parklands and later the Bathing Pavilion at Southport. An event to this day that raised our profile and awareness within the community.

2009 also saw the purchase of our historical layout “Southport C.1960” a scale reproduction of the Railway Precinct at Southport.

2010 in July was when we conducted our inaugural “Miniature Trains on The Coast” Model train show at Ashmore PCYC. Its success gave us the confirmation that the Gold Coast was ready for such an annual event.

October 2010 also gave many of our members the opportunity to attend the NMRA-AR annual convention at Adamstown, near Newcastle.

A year of consolidation with the club attending many Model Train Shows throughout South-East Queensland, Sunshine Coast and Darling Downs.

The second “Miniature Trains on the Coast” exhibition was once again held at Ashmore PCYC with a greater patronage than 2010. The event was starting to develop a reputation, within the hobby, as a well organised and managed exhibition.

Members once again attended the NMRA –AR Conference this time in Melbourne and setting precedence for years to come.

A concerted effort to locate long term premises was undertaken with the outcome that we were offered a property on Gold Coast Highway, Broadbeach. But alas it was not to eventuate as the building was destroyed by fire the day after we commenced preparation to occupy.

Events happened quite quickly in 2012 with us being offered and accepting casual tenancy at Oasis Shopping Centre, Broadbeach. We occupied two sites over the year and enabled us to set up both “Southport c.1960” and “Intercontinental”. The ability to have a home and be able to interact with the general public was appreciated.

Many Train Shows were attended including what was to be the final Murwillumbah train and hobby show.

Throughout the year a new exhibition layout was evolving “Domino Effect”. A HO/OO club layout based on the popular T-Trak design. This enabled us to rest Intercontinental and with the modular design we could change displays at each exhibition.

The 3rd Annual Miniature Trains on the Coast show was again at Ashmore PCYC with ever increasing popularity and interest from other clubs and exhibitors.

The NMRA –AR Conference this time in Niagra Park was well attended by members with one of our own handing in a paper and conduction a session.

2013 saw the club getting out and supporting other community causes such as a display at A B Patterson College Annual Fete and Carols Under the Stars at Robina and pre-Christmas display at The Pines Shopping Centre, Elanora.

Many Model Train Shows were displayed at throughout the year and we were pleased to support the Redland Bay Model Railway Club at their inaugural show at Cleveland.

The 4th Annual Miniature Trains on the Coast show was again held at Ashmore PCYC, unfortunately for the last time. Internal renovations to the facility and due to the fact that our show was outgrowing the facility our next show would have to be at a different venue.

Another new home. This time we negotiated with South Coast Restoration Society at Pimpama to establish our long–term home.  Unfortunately, all did not go as planned and towards the middle of the year we found ourselves homeless again. Not to be daunted we did enter negotiations with Gold Coast City Council as to occupying facilities in Deodar Park, Burleigh Heads. The will of the standing councillor meant that once again we were to miss out.

To satisfy our members into N Scale “The Land of Diversity” was constructed. Another layout based on the T-Trak principal and giving the club an additional layout to show at exhibitions etc.

The exhibition calendar is getting bigger every year. Yet more additions were the East Coast Hobby Exhibition held at South Tweed Heads Bowl Club and arranged by The Tweed Valley Modellers, and the South Coast Restoration Society’s Rally at Pimpama.

Interaction with the General Public is critical so a display was arranged at Australia Fair Shopping Centre. Over the 3 weekends more than 1000 visitors were recorded.

AB Patterson College, Arundel, was chosen for our 5th Annual Miniature Trains on the Coast, model train and hobby Show. As the facility was larger we invited other hobbies from Marine Modelling, Model Aircraft, Radio Control, Tweed Valley Modellers and Tweed Valley Miniature Live Steam Group to display. All proved very popular giving us the confidence to go forward at following shows with additional hobbies.

The members of the club assisted the NMRA in conducting their annual conference at Helensvale. When we entertained over 100 NMRA members over a week end culminating in a conference dinner where we were able to arrange The Local Studies Unit of Gold Coast City Council Southport Library to show their presentation on the South Coast Railway. It was very well received.

Another year spent searching for that elusive home for the club. Members were not found idle with a number of skills days and working weekends at specific member homes whereby we continued to develop our skills and learn new facets to the hobby.

An early inclusion to the Queensland exhibition scene saw us supporting the Burnett Model Train Club with their inaugural exhibition in Bundaberg in March. Many other exhibitions followed throughout the year from Brisbane, Toowoomba, Strathpine, South Tweed Heads, Cleveland and Caloundra. As well as club visits to Logan and District Model Railway Club, Ipswich Model Railway club and Cannon Hill Community Model Railway Club.

The Carrara Indoor Sports Centre was approached and the 6th Annual Miniature Trains on the Coast, model train and hobby show was conducted on the 11th and 12th July. With the additional space we were able to attract more and new exhibitors with plenty of room for our guests. The show was now developing a wider interest base.

After many promises with our hopes high and low the club has made a concerted effort in so far as full time premises. A sustainability report and expression of interest has been submitted to Gold Coast City Council for an existing property. It will take some time for a result to be known but things do look promising. Maybe 2017 will be our year.

The clubs calendar was quite full this year with participation in no less than 7 model train shows as well as representation at the National N Scale Convention in Brisbane, Modelling of Queensland Railways Convention and the New England Convention at Armidale.

We were fortunate enough to purchase a 4 car set of the Southport Cars for “Southport c.1960” which was featured in a historical display “Romance of Rail” at Kirra.

The 7th Annual Miniature Trains on the Coast, model train and hobby show enjoyed another successful event at Carrara Indoor Sports Complex. More displays and more model railway layouts were offered to the public. Also we welcomed new exhibits from the Brisbane RC Tank Group, Queensland Omnibus and Coach Society, Tweed Valley Modellers and Paradise Point Yacht Club even the TARDIS made an appearance.  More traders travelled from the Sunshine Coast and even as far away as Sydney and Taree. VIP visitors included GCCC Mayor Mr Tom Tate and local councillor Mr Bob La Castra whom came on board to assist us financially. A more aggressive advertising programme was carried out with an association with the Friday Flyer, a regional home delivered weekly newspaper, the Sun Newspaper and more radio exposure incorporating ABC Coast FM and community broadcaster Juice FM. We took displays to Runaway Bay Shopping Centre and My Centre, Nerang promoting the exhibition. Our publicity formula was getting better results. These additional programmes would not have been possible without our valued sponsors, Bendigo Bank (whom had been with us since our inaugural show), G-Link, Councilor Bob La Castra and Mr Robert Molhoek , Member for Southport, Queensland Parliament.